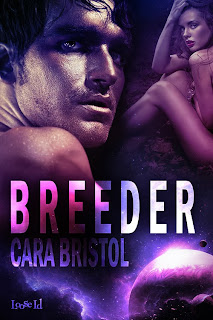 Blurb
To secure his legacy, Commander Dak, a ruling Alpha of planet Parseon, purchases Omra, a breeder slave. He intends to impregnate her, produce a son, and hand her off to his anointed beta partner. As Dak and Omra discover a sexual bliss banned by law, he begins to question the traditions and ways of his people, causing him to jeopardize his command and endanger the life of the woman he has come to love.
Warning: Breeder contains M/F and M/M sexual practices and domestic discipline.

If not for the sneeze, Dak would have exited the musty, dank corridor. But the muffled sound caught his attention. When he squinted into the darkened cell, he spotted a female crouched on a straw mat in the corner. He hadn’t noticed her on his way into the Breeder Containment Facility; the habitation unit had appeared empty.
Dak turned to the BCF director and sighed. “What about her?”
The beta’s already crooked mouth drooped farther in distaste. “My apologies, Commander. You don’t want that one.”
Sival’s disparagement piqued Dak’s interest. The director’s opinion had proven worthless; none of the breeders he’d preselected for inspection had rated close to satisfactory.
“I would like to see her,” Dak insisted.
“Very well, Commander.” Sival saluted and opened the habitation cell with a master entry card. Dak stepped into the small enclosure. The director followed, and the metal gate clanked shut.
The naked female drew into a tighter ball and tucked her face deeper into the crook of her arm. Other breeders had preened as soon as they’d noticed him and his chest-insignia identification. He wasn’t just an alpha. He was the Alpha.
This breeder’s lack of respect and failure to adhere to Protocol by acknowledging his presence struck him as odd. Dak frowned. “Is she mentally deficient?”
Sival tightened his lips. “No, stubborn, ill behaved. She would not befit an Alpha Commander.” He nudged the female’s hip with the toe of his boot. “Rise to your feet.” She did not respond, and he moved to prod her again. Dak forestalled him with a wave and grasped the female’s arm.
“You will stand.” He hauled her upright. She averted her face, so he grabbed her chin and forced her to look at him. Tangled hair the color of black heating stones fell back from an oval face to reveal eyes like the Parseon moon. The glimmer of intelligence that sparked within the violet depths aroused his interest more than anything else he’d seen so far. Nature had bestowed the Parseon people with an exceptionally strong immune system so that they rarely required medical intervention, but breeders by nature were weak, and so many of the ones he’d seen had seemed dull or ill or both. This one’s skin, when unsmudged by grime and dirt, probably glowed like the pale sands of the Ospian Sea. He supposed, as breeders went, she wasn’t unattractive, although the stench emanating from her was. His beta would throw a fit if he dragged such a creature into their domicile.
“Why is she so filthy?” he asked.
“She refuses to bathe.”
As Dak scrutinized her facial features for shape and symmetry, he noted little imperfection or dysgenics other than her lack of hygiene and her gender. When cleaned up, she would please the eye, but to bear his sons, it mattered more that she be healthy and strong.
He released her face, stepped back, and assessed her from head to toe. He exceeded the height of most males, alphas included, while she stood smaller than the average female. The top of her head failed to even meet his shoulder. She was thinner than other breeders too, although her chest bore an abundance of fatty breast tissue. In the chill of the cell, her nipples had puckered to hard points. Despite the coolness, he was experiencing a rise in temperature. A dormant lust chose that moment to kindle, causing heat to coil in his abdomen and groin. He could not remember the last time he’d experienced such a spontaneous reaction—if he ever had. With the pads of his fingers, he probed the sides of her neck for swollen areas. The way she trembled under his touch aroused a sliver of sympathy. Breeders lacked courage, and uncertainty frightened them. Not all alphas and their betas treated breeders well. If he chose her, she would be adequately fed and housed. His command consumed his time and energy, which left his beta alone for long stretches. A breeder would relieve Corren of household chores and provide him with a physical outlet as well.
“What is she called?” Dak asked.
“Her sire named her Omra.”
Peace, it meant.
He parted Omra’s lips with his fingers and slipped a digit into her mouth, running it along her upper gum line to check the solidness of her teeth. At a flash in her eyes, he jerked his hand away a centisecond before she snapped her jaws together, so that her incisor only grazed the tip of his finger.
Sival’s face reddened. “Commander, I apologize. I will have her flogged.”
“Unnecessary. I will take care of it.” He unclipped the sudon from his belt.

They had halted under a portico, its roof supported by two massive stone pillars. Builders had constructed the lower portion of the main structure from gray Parseon marble, the top half from an opaque reflective material. In keeping with Parseon culture, which valued function over beauty, the edifice formed a square, its corners and walls plumb, with not a single stone misaligned nor a single adornment to soften the starkness except for veins meandering through the marble in an unruly way.
“My domicile,” Alpha announced.
A massive wooden door opened, and a tall man emerged.
Corren, she presumed, and studied him from beneath her lashes.
If not for his insignia and his brown uniform, he could have been mistaken for an alpha. Corded muscles bulged in his arms and rippled across his chest. His hair was of some medium shade, cropped short like an Alpha rather than chin length like a typical beta. He spared her not a glance but focused on the Commander.
Alpha alighted from the conveyance, and the two men embraced in a Bridge of Amity, a sign denoting friendship or a truce, depending on the situation. The Commander clasped Corren’s bare right shoulder, and the beta touched Alpha’s left uniform-covered one, their arms forming a link between them. She studied the two men and redacted her impression of Corren as alpha-like. Next to the Commander, he dwindled in stature and comportment. He stood almost a head shorter, his shoulders were narrower, his musculature puny, his bearing common. But who could compare to Alpha?
“Kianiko?” Alpha asked, in the Parseon greeting used with familiars.
“I am well,” the beta responded. “Kianiko?”
“Excellent. The ride offered a pleasant diversion.”
They broke apart, and Corren retreated. He continued to ignore Omra but eyed the beasts and the sheen of sweat glistening on their coats. “I do not understand why you travel this way. But as you will. I shall have the stable keeper unbridle the animals and tend to their needs.” He paused. “Tell me about the female.”
“She is unbred.”
Corren arched his eyebrows.
Dak yanked up her shift, nudged her legs apart, and flicked at the ring between her legs. The sun felt hot against her exposed sex, the finger that brushed against her warmer still.
Alpha was focused on her, his head bent, so he did not catch the animosity that flashed in Corren’s gaze, but Omra did. She swallowed.
“A fortuitous find for you,” Corren said. Equanimity filled his eyes now.
The Commander let her smock fall. “And for you. She will serve your physical needs when you require release.”
“Thank you.” Corren nodded, but he did not sound at all grateful or appreciative, not to Omra’s ears anyway. “Now I understand why a courier delivered female uniforms this morning. I almost sent them back to the vendor, thinking it an error, but decided to check with you.”
“The articles came? Good. That was fast.”
“You are Alpha,” Corren commented drily. The familiarity Alpha allowed his beta heightened Omra’s respect for the Commander. Secure in his status, he did not dominate for the show of it.
“Indeed.” Alpha’s mouth twitched as he exchanged a glance with his beta. He beckoned to her. “Come.”
Omra scooted to the edge of the seat and jumped to the ground. She stumbled and would have fallen on the stone entry walk except that Alpha caught her elbow and steadied her. “This is my beta, Corren,” he informed her. “You remember what we talked about.”
Obey. She nodded in comprehension.
To Corren he said, “Her name is Omra.”
The beta tightened his lips.
Alpha arched an eyebrow. “You find her lacking?”
“May I speak freely?”
The Commander nodded. “Your opinion is worthy.”
“She appears scrawny and weak bodied, and I predict she will be unable to bear the rigors of domestic labors, let alone produce your progeny.” He sniffed.
Dak blinked. “You sound almost jealous.”