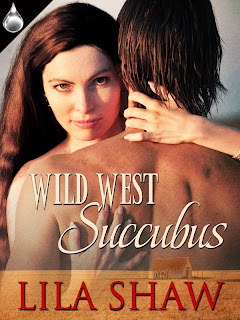 Blurb:
A woman damned…
Priscilla Goodnight, a widow in the harsh Kansas frontier, has a cattle ranch to run. She can’t afford to reveal any cracks in her tough exterior or indulge in sexual liaisons with her ranch hands. But a hungry succubus can only exercise so much self-restraint, making discretion, disguise and memory-wiping her top managerial skills.
The mysterious stranger who knows her darkest secret…
Priscilla doesn't remember hiring the man with the wily smile and the flannel voice. At all. Men as physically appealing as Hugo Desmond rarely escape her bed, let alone her memory. And how is he able to move so fast, yet nobody notices but her?
Is she his target, his mission or his bait?
Hugo is a gargoyle—a specially-trained executioner—sent to purge the west of evil. With succubi falling squarely in demon territory, Priscilla has every reason to fear him … yet she can't stay away. Hugo says he needs her help and wants to save her soul. But is redemption possible for a woman as wicked as Priscilla, or will love thaw her heart just enough for Hugo to crush it?


Meet Hugo Desmond, Gargoyle and Demon-Slayer
A big welcome to my guest today, Hugo Desmond, the dashing hero of Wild West Succubus by Lila Shaw.
First let me describe the man to you. His large size is what you notice first of all. Hugo tops six feet by at least four inches. He's broad-shouldered and long-limbed, with dark hair on his face and head and piercing blue eyes that if given the chance, could bore into your very soul. Hugo is powerful-looking, not from overly large muscles, but from the quiet strength he exudes and his ability to move more quietly than you'd expect from a man his size.
Interviewer:  Welcome Hugo.
Hugo: Thank you, ma'am.
He doffs his hat, but offers nothing further other than the controlled smile on his face. A pensive cowboy who's so much more than that.
Interviewer:  So I understand that you're a gargoyle? Does that mean you turn into a dragon or other hideous monster like the stone creatures carved on Notre Dame and older public buildings?
Hugo's eyes flash mischievously and his cool facade melts. He chuckles with a deep, warm voice.
Hugo:  No. That's a common misconception. I'm as human as you are, with the minor exception that I happen to have some demon blood in me. Oh, and I have a few...uh...abilities most humans do not.
Interviewer:  Oh, so you're a demon but you kill demons? Awkward...
Hugo:  I'm not a demon. (His smile fades and he crosses his arms at his chest.)  I have demon blood but I have overcome its influence.
Interviewer:  Overcome its influence? What did that involve and are you likely to backslide at any point? (I shift my chair away slightly.)
Hugo: To become a gargoyle, I had to undergo grueling training, training that could have killed me. Overcoming our personal demons, so to speak, is the most critical test we must pass before we may call ourselves gargoyles. After that, we study the various demons plaguing mankind--their strengths and weaknesses and how to subdue or destroy them. But we are human and can be wooed over to our darker sides.  (He pauses and glances off into the distance behind me before locking me in an intense gaze.) However, if that were to happen, I would be hunted and destroyed by my own kind.
Interviewer:  Alrighty then. And what are these abilities you mentioned earlier. Tell me about those.
He taps the brim of his hat against his knees, his lips pursed.
Hugo: Hmm. Not sure I can really explain it to you. Let's just say when you learn how to handle time, to treat it like a tangible object you can mold and drape yourself in, you may be perceived as having extraordinary speed, stealth, and telekinetic abilities.
Interviewer:  Huh? Can you explain that a bit more?
Hugo's brows lift and he shakes his head.
Hugo:  No.
That's it. Hugo refuses to shed any more light on what he means. His lips have pressed into a thin line and he's shifted back into his chair, one ankle resting atop the opposite knee.
Interviewer: Tell us about Priscilla, then.
A huge grin complete with a flash of some beautiful white teeth hints that he will be far more forthright on this topic.
Hugo:  Ah...Pris. A succubus, but not like any I'd met before. I knew she was different almost from the start. Beautiful and smart, but cynical and hardened and carrying a heavy burden of sorrow and guilt. I'd been sent to kill her, you know. I guess what struck me most was how she rationed her hunger, how she selected her prey. Most demons aren't so picky about who they choose, and they certainly don't self-censure the way Pris did. Oh sure, she had her weaker moments, but she also had a strong flame of humanity still burning brightly in her. She was a beacon in the darkness despite being part of that darkness. (He pauses and cocks his head.) Did that make any sense?
Oh, I see why poor Priscilla never had a chance with this one and why she didn't run when she realized what Hugo was. That megawatt smile is on full display again. I can do nothing but nod and smile back at him and wonder if he has a brother. :)

********
My Thoughts:
Wow! This was one hot book! Hot AND smartly written! I enjoyed the quick paced, down and dirty plot! I loved that Priscilla was a no nonsense gal yet still had a kind of soft charm all at the same time. The banter between Priscilla and Hugo really was the spotlight for this story. They had a great chemistry that was allowed to come to a slow boil before spilling over in a very enjoyable way. I totally wished this book was longer, but what it had packed a great punch! 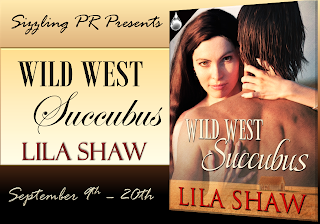