Blog Tour: Going Through The Notions 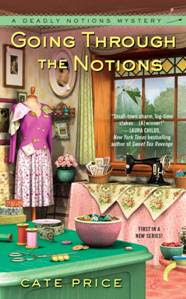 
A retired schoolteacher—and yes, daughter of a Fitzgerald fan—Daisy Buchanan has found her calling in the village of Millbury, Pennsylvania. While her husband endlessly renovates their old house, Daisy happily presides over Sometimes a Great Notion, a quirky shop that sells sewing bits and bobs, antiques, and jewelry.
Daisy has her eye on an antique dollhouse and a classic Singer Featherweight at the local auction—until her friend and mentor, auctioneer Angus Backstead, is led away in handcuffs. It appears he bashed in the head of a drinking buddy who stole a set of fancy fountain pens. Daisy’s sure the sprightly old-timer couldn’t have done it. But she soon learns Angus had more than a few enemies…including the detective on the case.
As Daisy seeks the truth, she also uncovers some leads: a disgruntled heiress hunting for the pens, two farm boys with a grudge against the deceased and the accused, and a twisted scam that entangled the dead man. But if Daisy can’t stitch together the bidder truth soon, Angus will be going once, going twice…gone forever. 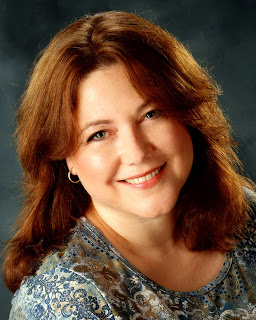 Cate Price was born in England and came to the U.S. when she was sixteen. She is a regular sight on the streets of her home town walking her two amazing rescue dogs, and enjoys gardening, yard sales, and cooking with friends. Her previous (unpublished) books span the genres of romantic comedy, romantic suspense and murder mysteries, and have finaled in numerous contests, including the prestigious Daphne Du Maurier Award for Excellence in Mystery/Suspense. She is a member of Sisters in Crime and Romance Writers of America.
Writing the first book in the Deadly Notions mystery series proved to be rather an expensive project, because while researching auction houses, she also became addicted to bidding on box lots. She is currently hard at work on the next book in the series, A DOLLHOUSE TO DIE FOR.


Links:
Cate loves to connect with readers at her website, http://cateprice.com/ on Facebook at www.facebook.com/catepriceauthor or Goodreads at www.goodreads.com/cateprice

My Thoughts:
I had this strange notion (haha!) that this book would be fun and I was not disappointed! I really like the way that Cate Price describes her characters and sets the tone of the novel from the start. You know that Daisy is not going sit on her butt and be idle while her friend is in trouble! She's not a tough chick, but she's not a push over either. Loved that!

The story did start off a bit slowish for me, but it turned out to be a slow simmer that really starts to boil over as you move through. Definitely a good work up to the big finale, which I won't spoil! I think you should read it for yourself!

The writing is on point, the characters are great and nicely written, the main character is interesting, and the story just flows naturally. I think this is a great first installment to a series and look forward to what is to come! 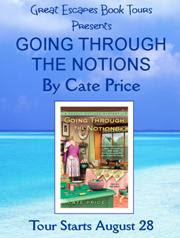