Other Shelf Tours: The Mark 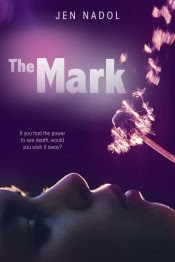 Description:
Cassandra Renfield has always seen the mark—a glow around certain people reminiscent of candlelight. But the one time she mentioned it, it was dismissed as a trick of the light. Until the day she watches a man awash in the mark die. After searching her memories, Cassie realizes she can see a person’s imminent death. Not how or where, only when: today.

Armed with a vague understanding of the light, Cassie begins to explore her “gift,” seeking those marked for death and probing the line between decision and destiny. Though she’s careful to hide her secret—even from her new philosophy-obsessed boyfriend—with each impending death comes the temptation to test fate. But so many questions remain. How does the mark work? Why is she the only one who sees it? And finally, the most important of all: If you know today is someone’s last, should you tell them?

My Review:
This book was a fast read for me. I received it as part of a tour from Other Shelf Tours early yesterday afternoon and was finished by 6pm! The story itself isn't spectacular BUT it is well told and engaging! When I opened it I figured I'd just skim through and get a feel for it, since I had another book that I needed to get into. I flipped it open and started to read lazily but then I looked up and realized I'd been reading for an hour! Seriously, there is something hypnotic about this book. Like I said it wasn't spectacular but it did capture my interest enough for me to finish it in less than a day!

Cassie is written very well. She's real and flawed and believable. The minor characters are decent. I would have loved to see more of Jack. He seemed like a sweet guy and I thought he was sort of short changed on "page time." Lucas wasn't my favorite. He really came across as "meh" and pushy. The story is interesting enough. I would have loved more explanation about The Mark and what Cassie does with it in the future, but with all that I liked it a lot! It is very rare that I find a book that sweeps me up completely enough to forget about time!

Email ThisBlogThis!Share to TwitterShare to FacebookShare to Pinterest
Labels: 3.5, books, other shelf tours, the mark