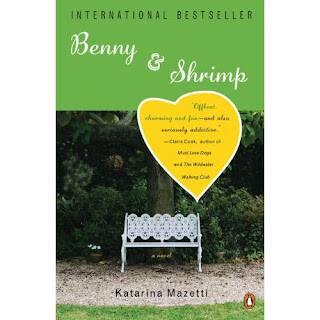 About the Book:
An international sensation, this addictively readable tale asks the question: Why is it so impossible to get a relationship between two middle-aged misfits to work? The answer lies in the story of Shrimp, a young widowed librarian with a sharp intellect and a home so tidy that her jam jars are in alphabetical order; Benny, a gentle, overworked milk farmer who fears becoming the village's Old Bachelor; and an unlikely love that should not be as complicated as it seems. Reminiscent of the works of Carol Shields, this quirky, humorous, beautifully told novel breathes new life into the age-old conundrum that is love.

KATARINA MAZETTI was nominated for the Prix Cevennes in France in 2007 and has worked as a journalist, teacher, and author of books for readers of all ages. For twenty years she lived on a small farm in northern Sweden, an experience that became the basis for Benny & Shrimp, her first adult novel, which was adapted into an award-winning film in Sweden (winning the Swedish equivalent of the Oscars).

I thought it was a charming tale of two very lonely people going through difficult times in their lives. It's at its core a quirky love story. It was a quick read and an enjoyable one. I wasn't as taken with it as I had hoped to be. I gave the book a 3.5/5 rating. I felt that some parts of their relationship were too rushed and certain spots were not very believable. I can't get too descriptive because it would ruin the book, but I cannot understand "Shrimp" just being okay with what her co-worker did. I know I personally would freak out but then again this is fiction.