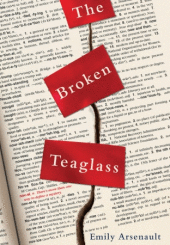 About the Book: (taken from The Broken Teaglass)

The dusty files of a venerable book publisher . . . A hidden cache of coded clues . . . A story written by a phantom author . . . An unsolved murder in a gritty urban park—all collide memorably in Emily Arsenault’s magnificent debut, at once a teasing literary puzzle, an ingenious suspense novel, and an exploration of definitions: of words, of who we are, and the stories we choose to define us.

In the maze of cubicles at Samuelson Company, editors toil away in silence, studying the English language, poring over new expressions and newly coined words—all in preparation for the next, new edition of the Samuelson Dictionary. Among them is editorial assistant Billy Webb, just out of college, struggling to stay awake and appear competent. But there are a few distractions. His intriguing coworker, Mona Minot, may or may not be flirting with him. And he’s starting to sense something suspicious going on beneath this company’s academic facade.

Mona has just made a startling discovery in the office files: a trove of puzzling quotations, all taken from the same book, “The Broken Teaglass.” Billy and Mona soon learn that no such book exists. And the quotations from it are far too long, twisting and bizarre for any dictionary. They read like a confessional, coyly hinting at a hidden identity, a secret liaison, a crime. As Billy and Mona ransack the office files, a chilling story begins to emerge: a story about a lonely young woman, a long-unsolved mystery, a moment of shattering violence. And as they piece together its fragments, the puzzle begins to take on bigger personal meaning for both of them, compelling them to redefine their notions of themselves and each other. 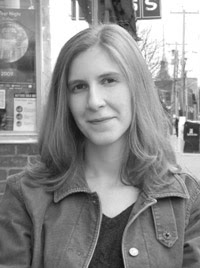 Emily Arsenault has worked as a lexicographer, an English teacher, a children’s librarian, and a Peace Corps volunteer. She wrote The Broken Teaglass to pass the long, quiet evenings in her mud brick house while living in rural South Africa. She now lives in Shelburne Falls, Massachusetts, with her husband. You can visit Emily Arsenault’s website at http://emilyarsenault.com/.

I really wasn't sure what I was going to find inside this book. The concept is intriguing in a unique kind of way. I mean how could a book about dictionaries be interesting? The story is described as a mystery. A mystery told through definitions, or at least the citations that the lexicographers write their definitions on and file them away. It's a puzzle...with a murder..maybe. It starts off as kind of a joke, at least to Billy but turns into a murder mystery that spans decades!

This book was a BIG surprise. You totally get sucked into this mystery right alongside Billy and Mona. Mona and Billy are well written characters. I would have liked to know more about Mona's background but, I like how she is slightly mysterious so I'm not complaining too much. You start to try to piece together the clues and you basically wanna gobble this book up in one sitting, just to find out what happens at the end! This was a total "carry around" book. I read it every chance I could!

I loved how the pieces of the puzzle came together at the end! It was so refreshing to have a mystery novel I could sink my teeth into. The ending was close to perfection (not going to spoil it) there was one little thing I would change but I cannot explain as it would definitely be spoilery. When you read it (because you NEED to!!) you'll understand.