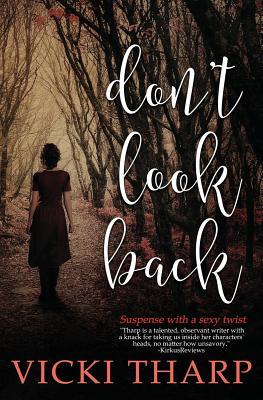 
Ridley Meyer’s latest murder left him unsatisfied, but the spitfire with the U-haul may provide just the challenge he craves.

Veterinarian Audrey West is running out of time, yet she is determined to keep her inherited home out of foreclosure. With no more than a dream, a prayer, and a packed U-Haul, West moves back home to complete the expensive repairs. Just when Audrey thinks she might pull off the impossible, she finds her dream is not the only thing being followed.

Scott Romero has it all—money, ambition and a growing reputation as the city’s top veterinary surgeon. However, when his best friend Audrey is abducted by a killer, Scott realizes what he doesn’t have and he must risk losing his job, and his life, to save her.

Don’t Look Back was a 2007 Romantic Suspense finalist in the Romance Writer’s of America Golden Heart writing contest.

EXCERPT:
He leaned in to scrutinize his work. “Let me see.”
She turned toward him.
He pushed her hand out of the way. He poked. He prodded. He pressed. “I did Doctor Frankenstein proud. Maybe my stepmother was right. I should’ve been a real doctor. At least I wouldn’t have risked my veterinary license stitching you up.”
“I don’t—”
“I know. I know. You don’t like hospitals.”
“It’ll take more than a little thump to get me in one again.”
“Little thumps don’t require stitches. Little thumps don’t give you a concussion. And little thumps don’t get you almost killed.”
“Not this again.”
“Yes. This again.”
He raised his hands and took a step back. “Do me a favor.”
“What’s that?”
“The next time one of your clients waves a gun around, stay out of the way.”
“What in the purple hell did you expect me to do? Let her kill herself?”
“You should’ve gone for help.”
“Ms. Sims wasn’t trying to hurt me. Her dog, her baby, dropped dead. She was distraught, disturbed. If I hadn’t nosedived into the bench grabbing for the gun, I doubt
I’d’ve had a scratch on me.” Audrey squeezed her head to keep it from exploding.
“You’re not Superwoman. Bullets won’t bounce off you.”
She didn’t have the energy for this. “Finished?”
“Not hardly.” Scott tilted his head and gave her that sexy half-smile. That devilish smile. That maddening smile the lucky few had followed to his bed.
It was too painful to think about, and not just because of her headache, so she pushed it from her mind. “Thanks for letting me crash at your place last night. And for stitching me up.”
She’d stuffed everything she owned into her truck and U-Haul trailer. That wasn’t saying much since the truck and trailer were small.
“Staying at a hotel by yourself with a concussion wasn’t and option. As for the other, I don’t know how you talked me into it. You’ll probably have a scar.”
“Not a problem as long as your malpractice is paid.”
A laugh rumbled his chest, but the smile quickly slid from his lips. “You should stay a day or two. Make sure you’re really okay.”
Audrey scooched back and propped herself up against the leather headboard. Her brain protested behind the fireworks and the nine-piece drumline. “I’ve only got thirty days to finish the repairs on my uncle’s house. I have to leave today. I’ll call you from the road, let you know I haven’t bled out into my head.”
“Not funny.” Scott frowned but kept her gaze. “I’m due at the animal hospital at seven. I’m going to miss having you around. Guess I can’t talk you into staying for good, huh?”
“What?” Her voice jumped two octaves. “Who’s the one who stood in my kitchen two weeks ago and told me I should go? ‘This is your last chance to make good on your promise to your uncle,’ you said. ‘Take a chance on your dream,’ you said. Don’t even—”
“Down, girl.” Scott eased her back into the pillows with a hand on her shoulder.
Thank God. Hells-bells clanged in her head.
“Forget I said anything. At least sleep for a few more hours and then head out. You don’t look so hot.”
No kidding.
He patted her leg and by the way he didn’t get up to leave, she knew he wanted to say more, but he wasn’t any better at goodbyes than she was. Then Scott braced his hands on either side of her head, and planted a quick kiss on her nose. Like an adult to a child.
It might have hurt less if he’d eviscerated her with a spork.
She was leaving Texas. This morning. For good.
She snagged his tie. “If that’s the best you can do, Romero, it’s no wonder your girlfriends leave you.”
Why had she baited him? He couldn’t refuse a challenge, any more than a dachshund could refuse table scraps.
Was her mind muddled from the concussion? Or was she finally thinking clearly? One kiss. That’s all she wanted.
Like a lover, not a friend. Stupid. He’d locked her in the friend-zone years ago.
Except for the night of her high school graduation.
And two weeks ago when he’d convinced her she should leave.
The look in his eyes was the same now as then. Want, need, hunger.
Hand over hand she pulled him down. His lips brushed hers. Her breath caught. She blamed the
concussion. Her hands trembled. She blamed the pain. Her heart hurt. She blamed herself.
She wrapped her arms around his neck, deepened the kiss, tasted the coffee on his tongue, smelled the subtle tang of surgical scrub that never quite left his skin. She tilted her head, and he nipped her lips, traced the line of her jaw and down to her pounding pulse at the base of her neck. She guided him on top of her, his weight braced on his arms, but she drew him down until his full weight pinned her.
She floated.
No fears, no worries, no will power.
No wondering if she should stop or if she could stop – because she didn’t want to stop. 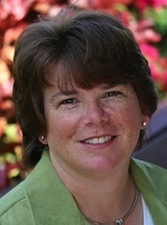 Author Bio:
Born with a love for animals, author Vicki Tharp pursued a career as a veterinarian, graduating from the Texas A&M College of Veterinary Medicine in 1992. Always an avid reader of mystery and suspense, she combined her interests into her first book entitled "Don't Look Back".
She makes her home in south Texas with her husband, two children and pets too numerous to mention.