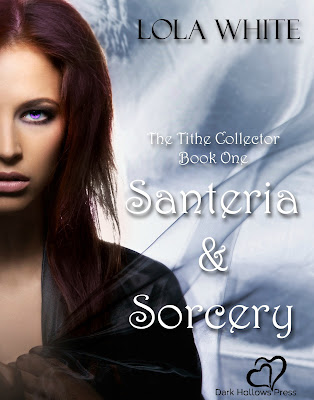 Santeria & Sorcery Synopsis
Magic is necessary to all things, but like any other source of power, it can be abused. The king of gods has created a Special Collections Team to deal with illegal magic users, those who break the law set forth by the Council of Five. Being part of the team is not an honor however, but a punishment for the crimes the teammates have committed themselves.
Zahra is a magic-addicted djinn charged with the capital crime of consorting with humans. Niccolo is a vampire who betrayed his goddess. Beryl is a fairy assassin demoted for her transgressions against a queen. Wade is the only human on the team, and though his inclusion is supposed to be a compliment, it’s clear there’s a larger plan in play.
From tragic romance to zealous belief, the Special Collections Team is in over their heads, but still must find a way to be successful in their investigations, pay their penance and learn to work as a team.
In Santeria & Sorcery, their first case finds them in Miami, where trouble has come to the attention of the Council of Five. A sorcerer is stealing magic to set himself up as a god, but the team is new and each are unused to working well with others. Their personal issues also hinder their investigation—dealing with bloodthirsty boyfriends, jealous fairy kings and a dangerous fallen angel on top of their own emotional deficiencies take a toll.
The Tithe Collector is an erotic series and does include graphic scenes: M/M, M/F and multiple partners.

Author Bio
Lola White writes what she writes, which is erotic fiction. Sometimes horror, sometimes paranormal, sometimes romance. It’s all sexy, but never predictable because she likes to twist reality at its edges in her stories. She likes delving into the emotions of her characters, finding their strengths and weaknesses, and seeing (and showing) how they get themselves out of whatever trouble has found them—if they can. Don’t try to label her collection of tales beyond the most basic description, EROTICA, because she writes whatever story comes to mind, whatever speaks to her. She’s certain something in her library will speak to you, too.