Blog Tour: The House on the Cliff 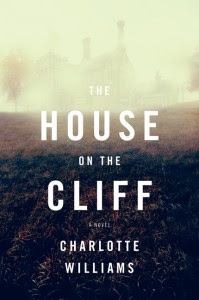 The House on the Cliff

Jessica Mayhew is a sharp, successful therapist with a thriving practice and loving family. But the arrival of a new client, actor Gwydion Morgan, coincides with a turbulent moment in her life: her husband has just confessed to a one-night stand with a younger woman. The son of a famous stage director, Gwydion is good-looking and talented but mentally fragile, tormented by an intriguing phobia. When Jessica receives a frantic call warning that he is suicidal, she decides to make a house call.
The Morgans live in a grand clifftop mansion overlooking the rocky Welsh coast. It seems to be a remote paradise, but there’s something sinister about it too: Jessica learns that the family’s former au pair drowned in the bay under mysterious circumstances. In her quest to help Gwydion, to whom she’s grown increasingly attached, Jessica becomes ensnared in the Morgan family mystery, which soon becomes an explosive public scandal—one that puts her directly in harm’s way. Meanwhile, Jessica is doing her best to keep her marriage and family together, but her growing attraction to Gwydion is impossible to ignore.
Smart, stylish, and suspenseful, The House on the Cliff announces the arrival of a winning female protagonist in Jessica Mayhew and an exciting new crime writer in Charlotte Williams.

After studying philosophy in college, Charlotte Williams went on to work as an arts journalist, writing for newspapers and magazines, and making documentaries for the BBC. She now works in radio drama, writing original plays and adaptations.

Hmm, well let's see. This book took a while to get into. It's what I guess can be called a slow burning book. I enjoyed the fine details and character development, so no complaints there at all! I love when I can feel like a character is a living breathing person and not just a character on a page.

The story centers on therapist Jessica Mayhew, a character I immediately enjoyed. She's a normal person. She's not the best therapist, but she's darn good. She's just someone that I could instantly click with, yet still feel compelled to learn more.

I do think that character development is where this book shines. Jessica, Gwydion, his parents, Jessica's family all shine and show careful crafting. I have a soft spot for books with characters like this.

The only part that seemed lacking is where the murder-mystery aspect comes in. It's a solid mystery, but it seemed a bit pushed to be suspenseful and not actually so.  This is a first book in a series, so   hopefully the kinks get worked out in future books. This definitely has a great deal of potential.