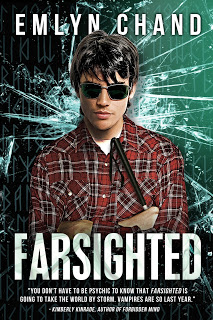 Alex Kosmitoras's life has never been easy. The only other student who will talk to him is the school bully, his parents are dead broke and insanely overprotective, and... oh yeah, he's blind. Just when he thinks he'll never have a shot at a normal life, an enticing new girl comes to their small Midwest town all the way from India. Simmi is smart, nice, and actually wants to be friends with Alex. Plus she smells like an Almond Joy bar. Sophomore year might not be so bad after all. Alex is in store for another new arrival—an unexpected and often embarrassing ability to "see" the future. Try as he may, Alex is unable to ignore his visions, especially when they suggest Simmi is in mortal danger. With the help of the mysterious psychic next door and friends who come bearing gifts of their own, Alex embarks on his journey to change the future. 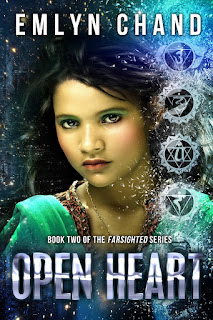 Simmi Shergill's life is a mess. Her powers of psychic feeling are on the fritz, and Grandon Township's sudden population boom has brought quite a few unsavory characters to town. She also looks like an over-blown balloon in her size 14 pants, but not even starving herself seems to be helping.

At least she has Alex, the boyfriend who loves her so much he'd do anything for her. Last summer, he even risked his life to protect her from the mysterious boy everyone was convinced wanted to kill her.

Just one problem: she's not so sure she feels the same way. Is Alex really the man of her dreams? Why can't she stop fixating on her would-be killer, Dax? Part of her wants to run screaming in the other direction whenever Dax is around, while the other part longs to run into his embrace, no matter whom she'd hurt or what she'd risk.

Simmi's loyalty is on the line. Whom will she choose—the blind seer who loves her, or the charming telekinetic with "bad idea" written all over him? Emotions run high in the tension-packed book two of the Farsighted series.

Having not read the first book, Farsighted, I was afraid I would be lost, but after a few little bouts of "huh?" I was right in there with the story. I loved Simmi. She's such a unique and determined character. You just kind of want to give her a big ole hug and make her laugh. The chick really has  a lot of issues going on in her life!

So story wise, this was a nicely paced, very nicely written book with a great plot and a VERY sympathetic main character. You probably should read the first one ..well first as I'm sure that might have made it a bit easier for me to slip into the story a bit quicker, but anyhoo...I really have to commend Emlyn  Chand for tackling some very serious issues and doing so in a non preachy way!

All in all, this was a big surprise for me! I didn't expect to gobble up this book quite as fast as I did! I enjoyed it and will definitely read Farsighted and the next book in this series!

The Giveaway:
Kindle or Nook (Winners choice) US ONLY, If international $100 dollar Gift Card to a bookstore.
a Rafflecopter giveaway
at February 13, 2013