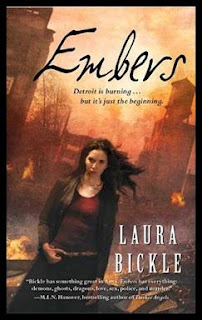 “One of the most promising debut novels I’ve read in a great while… I’d highly recommend this book to anybody who reads fantasy. It reminds me in many regards…of another exceptional first novel…Emma Bull’s seminal War for the Oaks, and there’s not much higher praise that I can give.”
—Elizabeth Bear on Tor.com
“Bickle has something great in Anya. Embers has everything: demons, ghosts, dragons, love, sex, police, and murder.”
—M.L.N. Hanover, bestselling author of Darker Angels
“Gritty but never grim, Embers is a truly urban fantasy, where the soul of a city haunts every page. I can’t wait for more of Anya and the unforgettable Sparky!”
—Jeri Smith-Ready, award-winning author of Bad to the Bone and Shade
Unemployment, despair, anger--visible and invisible unrest feed the undercurrent of Detroit's unease. A city increasingly invaded by phantoms now faces a malevolent force that further stokes fear and chaos throughout the city.
Anya Kalinczyk spends her days as an arson investigator with the Detroit Fire Department, and her nights pursuing malicious spirits with a team of eccentric ghost hunters. Anya--who is the rarest type of psychic medium, a Lantern--suspects a supernatural arsonist is setting blazes to summon a fiery ancient entity that will leave the city in cinders. By Devil's Night, the spell will be complete, unless Anya--with the help of her salamander familiar and the paranormal investigating team --can stop it.
Anya's accustomed to danger and believes herself inured to loneliness and loss. But this time she's risking everything: her city, her soul, and a man who sees and accepts her for everything she is. Keeping all three safe will be the biggest challenge she's ever faced.
EMBERS is available now from Amazon.com and Barnes & Noble.

So this is a book that starts off very good and ends VERY good. I cannot tell you how much of a kick @$$ heroine Anya  is. She's sharp witty, funny, and strong. I like that. The writing is superb and fun. The action is knock your socks off (and probably your teeth too) amazing. Anya isn't your, "let's fight in high heels and a bustier", kind of chick; but she does have a soft side. There's a balance to her personality that I think Laura Bickle captures very well. You see she's got vulnerable spots, but she can also hold her own. Double likey.

One thing we cannot forget about is SPARKY! How cute is that guy? Seriously? He even has his own twitter. So that's how cool he is! I like that even though Anya is tough, she has this little Salamander nugget of fun to watch out for her, to keep her from being totally alone. I think Sparky is just amazingly adorable and definitely brought the laugh breaks in during some intense moments.


This is a wonderful start to a series and I cannot wait to see what Laura Bickle has in store for us with the second book, Sparks!