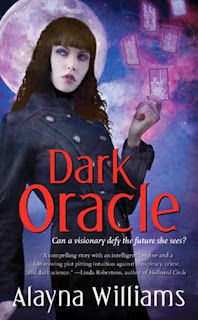 June 2010
DARK ORACLE is a scientific, paranormal read that takes readers on a wild chase. A subtle romance lends to the entertainment this read offers. Tara is a strong female who has many stories till waiting to be told. An interesting new series that is not quite like anything else! (4 stars)
-RT Book Reviews
“Dark Oracle is a lot of fun.”
-Elizabeth Bear, Realms of Fantasy Magazine, December 2010
Can an oracle change the future she sees?
Tara Sheridan swore off criminal profiling years ago. By combining Tarot card divination with her own intuition, she narrowly escaped the grasp of a serial killer who left her scarred for life. She put down her cards and withdrew from work and society. Now, Sophia, a member of an ancient secret society connected to the mythic Delphic Oracle, asks Tara to find a missing scientist who has unlocked the destructive secrets of dark energy. Tara resists— she fears reawakening her long-buried talents and blames Sophia’s Daughters of Delphi for the death of her mother. But, grudgingly, she agrees to search for the missing scientist, Lowell Magnusson.

Tara travels to Las Alamos National Laboratory, the location of Magnusson’s disappearance. She meets the serious, impatient, and highly attractive Agent Harry Li— and re-encounters her old partner, Richard Corvus. Corvus is now chief of the Special Projects Division, a position Tera might have held, had she not dropped out of investigative work. Corvus considers Tara mentally imbalanced and not to be trusted— but it may be Corvus who is untrustworthy.

Tara’s investigation and Tarot cards tell her Magnusson’s daughter, Cassie, may hold the key to her father’s plans, and that they both are in grave danger. Meanwhile, Corvus and the Daughters of Delphi have their own plans...and the fate of the world hangs in the balance.
Available now from Amazon.com and Barnes & Noble.
Read an excerpt at: http://books.simonandschuster.com/Dark-Oracle/Alayna-Williams/9781439182796/excerpt 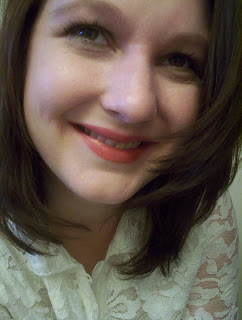 Alayna Williams has an MA in sociology-criminology (research interests: fear of crime and victimology) and a BA in criminology. She has worked in and around criminal justice since 1997. Although she does read Tarot cards, she's never used them in criminal profiling or to locate lost scientists. She recently took up astronomy, but for the most part her primary role in studying constellations and dark matter is to follow her amateur astronomer-husband around central Ohio toting the telescope tripod and various lenses. Like the Pythia in Dark Oracle, she's been known to belly dance. Unlike the Pythia she'd never consider herself a professional
Writing as Laura Bickle, she's the author of EMBERS and SPARKS for Pocket - Juno Books. Writing as Alayna Williams, she's the author of DARK ORACLE and ROGUE ORACLE.
More info on her urban fantasy and general nerdiness is here: http://www.salamanderstales.com/
Laura/ Alayna’s blogs
http://www.salamanderstales.blogspot.com and http://delphisdaughters.blogspot.com
She’s at Facebook
And Twitter...@Laura_Bickle
Sparky the fire salamander from EMBERS and SPARKS has his own Twitter account, @SparkySalamandr

My Review:
So I pretty much really enjoy a book that has a strong female main character that never ever backs down! This one definitely kept me rapt to my Nook reading and reading and wanting more! Tara is someone you want to immediately know more about and it's an almost a quick bond between her character and the reader.

The story is fast paced and coherent. There's the paranormal aspects and the "normal" aspects that are pretty much guaranteed to satisfy any one's reading tastes. The writing is smart and fresh, the concept is clever, the character development is pretty darn near flawless.

All in all, I felt like this was a great start of a series. I enjoy books that let you get to know the main character slowly instead of the dreaded, "info dump"  via flash backs or loooong introductions. This book let the reader slowly figure Tara out. You get a few pieces of information about her at the start, but you get to know her as you read on. You see what makes her tick and what drives her, and to me that was awesome! She is a great character and I can't wait to see more about her!
at February 15, 2012