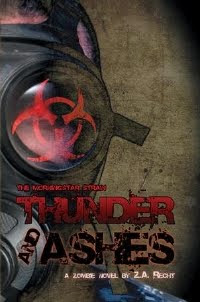 About the Book:
A lot can change in three months: wars can be decided, nations can be forged... or entire species can be brought to the brink of annihilation. The Morningstar Virus, an incredibly virulent disease, has swept the face of the planet, infecting billions. Its hosts rampage, attacking anything that remains uninfected. Even death can't stop the virus-its victims as cannibalistic shamblers. Scattered across the world, embattled groups have persevered. For some, surviving is the pinnacle of achievement. Others hoard goods and weapons. And still others leverage power over the remnants of humanity in the form of a mysterious cure for Morningstar. Francis Sherman and Anna Demilio want only a vaccine, but to find it, they must cross a countryside in ruins, dodging not only the infected, but also the lawless living. The bulk of the storm has passed over the world, leaving echoing thunder and softly drifting ashes. But for the survivors, the peril remains, and the search for a cure is just beginning...

What is it about Zombies that makes me a happy girl? Hmm..I just love to imagine myself kicking A and taking names during the Zombie Apocalypse! Seriously, I have spent many an hour daydreaming and making a check list..just in case. You never know, right?

This book is the second part of The Morningstar Strain series, but that didn't keep me from following the story. I haven't read the first one, but I do plan on getting it. ASAP. Yes, there are similarities to other zombie books and movies, but hullo? You can't have too many zombie books or movies! I liked this one very much. The action was well written, the characters were decent. I didn't stumble upon a single thing that made me say, "oh now that ain't right..."

I definitely think this is a good addition to any Zombie fans arsenal of awesome literature!
at December 01, 2010

Email ThisBlogThis!Share to TwitterShare to FacebookShare to Pinterest
Labels: thunder and ashes, zombies