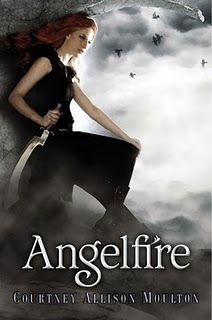 This debut, the first novel in a trilogy, is achingly romantic, terrifying, and filled with blistering action.

When seventeen-year-old Ellie starts seeing reapers - monstrous creatures who devour humans and send their souls to Hell - she finds herself on the front lines of a supernatural war between archangels and the Fallen and faced with the possible destruction of her soul.

A mysterious boy named Will reveals she is the reincarnation of an ancient warrior, the only one capable of wielding swords of angelfire to fight the reapers, and he is an immortal sworn to protect her in battle. Now that Ellie's powers have been awakened, a powerful reaper called Bastian has come forward to challenge her. He has employed a fierce assassin to eliminate her - an assassin who has already killed her once.

While balancing her dwindling social life and reaper-hunting duties, she and Will discover Bastian is searching for a dormant creature believed to be a true soul reaper. Bastian plans to use this weapon to ignite the End of Days and to destroy Ellie's soul, ending her rebirth cycle forever. Now, she must face an army of Bastian's most frightening reapers, prevent the soul reaper from consuming her soul, and uncover the secrets of her past lives - including truths that may be too frightening to remember.

So this is the first in what promises to be a very good series, this first novel was great! That said it did have a few problems. I had a little problem getting into it at first, but I blame it on getting all the introductions and "game rules" laid out for the reader. I pushed past all this and found myself moving through this novel at a steady clip.

I really think that this has the potential to be a great series! This book is really entertaining and kept me going. I enjoyed the interactions between Ellie and Will. I REALLY wanted to know more about him! He will make for a very intriguing storyline! He seems like a tragic hero.

Ellie's character comes across as a bit selfish. She's been shown her mission, been told what she is to do, but still tries to do what she wants. I can understand that she's been thrown into something she wasn't aware of but once her memories come back, she should ..I don't know.. deal? I guess this might be addressed in the next book? I hope so!

This is definitely one to pick up and read! I enjoyed it even with those minor issues!

This book was provided for me to review from:

Email ThisBlogThis!Share to TwitterShare to FacebookShare to Pinterest
Labels: angelfire, around the world arc tours