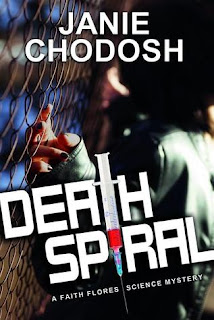 Life is tough when you have a junkie for a mom. But when sixteen-year-old Faith Flores—scientist wannabe, loner, new girl in town—finds her mom dead on the bathroom floor, she refuses to believe her mom really OD'd. But the cops have closed the case and her Aunt T, with whom she now lives in the Philly ‘burbs, wants Faith to let go and move on.

But a note from Melinda, her mom's junkie friend, leads Faith to a seedy downtown methadone clinic. Were her mom and Melinda trying to get clean?

When Melinda dies of an overdose, Faith tracks down the scientists behind the trial running at the methadone clinic. Soon she's cutting school and lying to everyone—her aunt, her best friend, even the cops. Everyone, that is,  except the strangely alluring Jesse, who believes the “real” education's on the street and whose in-your-face honesty threatens to invade Faith's self-imposed “no-dating” rule. A drug-dealer named Rat-Catcher warns Faith to back off, but it doesn't stop Faith from confronting a genetics professor with a guilty conscience. When the medical examiner's body winds up in the Schuylkill River, Faith realizes if she doesn't act fast, she may be the next body in the morgue. Can Faith stop this deal gone bad from taking a sharp turn for the worse?

Death Spiral is a smart, surprising novel featuring an in-your-face heroine sure to appeal to teens and adults alike.

This book was a smart, fast-paced, and well constructed thrill ride. Faith is a wonderful character that is smartly written and completely real. She's true to herself, even when she isn't completely honest with others, and a complete badass. She uses her brains to expose a conspiracy that's already taken the life of someone she loved very dearly. She's certainly not a damsel in distress! I loved getting to know her, and her friends were pretty awesome too! In some YA stories, the friends take a backseat and pop up with useful info when the story requires it, a bit too convenient for my tastes, if you ask me. However, her friends are all just as developed as she is.

Death Spiral was a fun and interesting read from page one! I thoroughly enjoyed it! 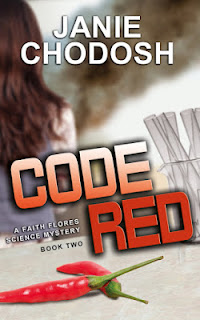 From Goodreads:
After nailing the murderer of her addict mom and proving that her detractors are full of it, seventeen-year-old Faith Flores is back for another kick-ass science mystery. She's proud to be chosen for a summer internship at a research lab in Santa Fe, New Mexico, but once she arrives, complications abound. For one thing, Santa Fe is the birthplace of the father she's never met, and for another, she clashes with a local environmentalist trying to pull the plug on the genetically modified chiles her new boss is engineering. She and violin prodigy, Clem, learn of a new teen drug called liquid gold while discreetly researching the family angle. The chip on Faith's shoulder is still there, but so is her determination to uncover the truth when a girl she meets at a party dies from an overdose of liquid gold.

This book was just as awesome as the first! I'm really loving how Faith is evolving as a character and the writing was already pretty on point, but in this one it was just as tight. There's another mystery that keeps you flipping the pages, more characters that are just as well written as Faith, and more deliciously geeky science and sleuthing that just makes this series super fun!

I'm telling you guys this series is pretty darn awesome! I wouldn't recommend missing out on it!
at February 10, 2017