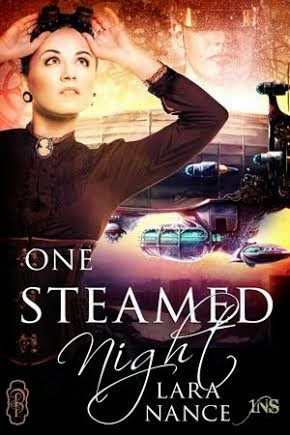 One Steamed Night
by Lara Nance

Mina Davis is sick of the modern dating scene with its vanilla settings and weak-willed suitors. What ever happened to old-world romance and swashbuckling gentlemen? She craves adventure, and hungers for a charming rogue who’ll sweep her off her feet and into his bed.

When her friend, Regina sets her up on a one-night stand through an exclusive matchmaking website, Mina leaps at the opportunity. Little does she know, and thanks to Madame Eve’s magic touch, Mina’s about to have one steamed night

A cloud of gray smoke drifted by, clearing the air. Her breath caught in her throat and she clutched her chest, fear shooting through her. They traveled in a galleon, high above the ground. Over her head floated a large inflatable attached by a series of ropes. Madame Eve was a magician to create such reality.

“This way,” her escort shouted above the din. He held tightly to her elbow and hurried to an aft deck a few steps above the main deck. “Cap’n. Here she is.”
A tall man behind the ship’s wheel yelled, “Aye. Now, man the main engines. We need more steam.”
Using both hands, she held onto the stair rail, staring, her mouth slack. The captain was the embodiment of all her fantasies. Broad-shouldered with muscular thighs and narrow hips. Long, blond hair hung to his shoulders. Dear Lord. This man belonged on the cover of a romance novel. That’s more like it.

“My lady, please come up. We’re trying to fight off air pirates.” He extended a hand in her direction.

She gulped in a breath. Smoke from the cannon swirled about her. The acrid scent stung the back of her throat and she choked.

“What is all this?” she asked, wiping her tearing eyes.

“Hurry.” With a wave of his hand, he motioned her to his side.

A cannon ball whizzed past her head and over the side. With a scream, she ran up the steps.

The captain’s arm encircled her waist, pulling her to his side. . He wore a brown leather jacket and flight helmet. Goggles covered his eyes, so she could only guess at their expression. His tan pants were tucked into thigh-high boots. Like the other man, he sported a scabbard and sword, with a pistol in his belt.

“Captain Ross, we scored a direct hit,” one of the men on deck shouted.

His fellows roared their approval, raising hands in the air.

“Don’t stop now, mates. There’s three more of them,” the man at her side shouted. He gazed down at her and grinned. “Don’t worry, my lady. Three to one are odds I like.”

“Who are they?” Her breath caught in her throat at the nearness of his handsome face.

“Air pirates. No doubt they heard you were aboard and figured you’d have a fortune in jewels with you.” He gave her a saucy wink and squeezed her waist.

“Why would they think that?” She wiggled in the tight embrace. Who is this man?

So this book packed quite a good deal of steam..(see what I did there?!) in just a few pages. I really enjoyed that there was a very nice build up to the fun bits. I liked Mina and her personality quite a lot from the start. She's smart, selective in whom she dates, and isn't afraid to say it and say it quite bluntly I might add. Her friend Regina gets tired of her friend being so picky, so she gets her set up with Madame Eve and her "special" services.

...If Madame Eve existed in real life she would be the richest person on the planet.. *She'd have to be a wizard, but she'd be a VERY RICH wizard!*

Like I mentioned before, the story is short but very fun! I thought the hot bits were smoking hot, the build up parts were nice and smooth..no awkward chit chat, just flirtatious fun and teasing!

My only complaint is that it's sooo short! I really wished there was more! Great story!