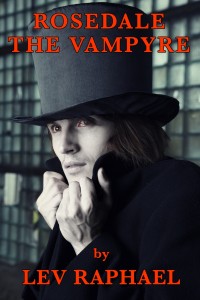 
Excerpt:
Rosedale left work early; it was his privilege.  Outside, he glanced up the columned, pilastered façade of the family investment bank, whose cupola supported a massive American flag.  Some days he thought of this building as no less a jail than the newly-built Tombs Prison, which city fathers promised would be more salubrious than the squat, sinking pile of mock-Egyptian masonry it had replaced.
In the evening, Rosedale dismissed his valet and dressed himself with dispatch for the opera, though intent on a different kind of spectacle. He eschewed his shiny new brougham with the sable lap robes and even his newer motor-car.  Rather than let his liveried driver know what he intended, Rosedale hailed a hansom on Seventy-Second Street outside The Dakota where he lived in spacious apartments across from Central Park.
Asking the driver to proceed without dawdling to West Thirty-Ninth Street, he closed his eyes and lolled back against the worn cushions, withdrawing from the city’s nocturnal clamor, anticipating the pleasures ahead downtown. He was abroad in the dark marketplace that was nighttime New York where nothing could be easier to procure than oblivion.
As he had been doing for months since losing his beloved Florence, he intended to purchase brief extinction of his grief by drowning himself in flesh.  His destination was in the Tenderloin, a notorious, welcoming seat of vice, a veritable paradise of possibilities for gambling, drinking, smoking opium, and whoring. Thirty-Ninth Street was known these twenty years as Soubrette Row, where houses of prostitution far outnumbered buildings whose citizens earned their living with less abandon.  This street was home to French parlor-houses where delights some considered unspeakable and perverse were easily obtained. 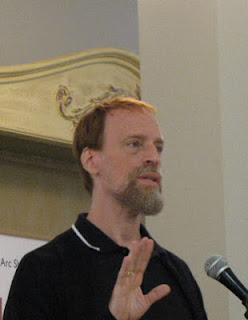 Lev Raphael is the author of twenty-four books in genres from memoir to mystery to Jane Austen mashup.  He’s been in love with storytelling since second grade and a reader of catholic tastes since he discovered his first public library.  Lev has published traditionally with large and small houses, and recently gone indie because it’s the wave of the future.  His latest fiction, Rosedale the Vampyre, grows out of his love of The Gilded Age.  Lev has been a newspaper columnist, a radio talk show host, a DJ and even an academic.  He writes and reviews full-time and is currently working on three different book projects.
You can visit his website at http://www.levraphael.com.


My Review:
This was a quick read for me. Only coming in at about 80 pages, but those pages were wonderfully written! There wasn't a lot of new ground broken about vampires, but it certainly made me want to read more about Rosedale and his story.

I think this was an eloquent novella. Short, but definitely not lacking in substance. You see what Rosedale is like before and after his transformation. You go along with him on his journey through adjusting to his new life. You get invited inside this man's world, his time, and his culture. The city of New York is full of the rich and the poor, living so close together that corruption and chaos reign in many areas. This definitely paints a very desperate and intriguing backdrop.

The end sets  the reader up to be intrigued to find out more, to want to read more of Rosedale's story and to see what comes next! It's not left in an annoying way as some cliffhanger, but Rosedale the Vampyre grabs the reader's interest and makes them want to come back for more.. 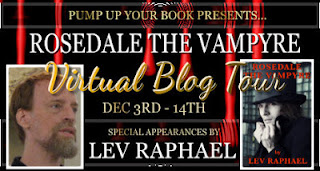 Email ThisBlogThis!Share to TwitterShare to FacebookShare to Pinterest
Labels: blog tour, pump up your book, rosedale the vampyre