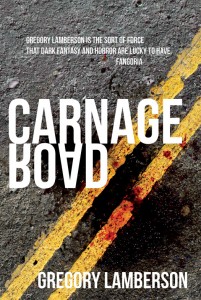 About:
Boone and Walker, the last two members of the Floating Dragons motorcycle gang in Buffalo, set out to re-discover America during the zombie apocalypse. Their odyssey takes them to Ohio, Kansas, Hollywood, and a last stand in Texas. Along the way they learn just what happens when the federal government ceases to exist, and it isn’t pretty.

A tale of friendship and loyalty, Carnage Road is author Gregory Lamberson’s unforgettable ode to westerns, biker pictures, and the cinema of the living dead. 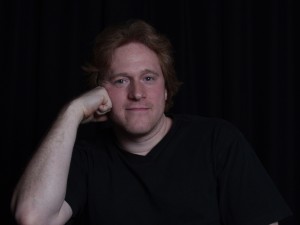 Gregory Lamberson is the author of five published horror novels and one nonfiction book on independent filmmaking. A two-time winner of the IPPY Gold Medal for Horror for his novels Johnny Gruesome and Personal Demons, and a three-time Bram Stoker Award finalist, he has three books scheduled for 2012: his zombie novella Carnage Road, from Creeping Hemlock Press; The Frenzy War, Book Two in his werewolf series “The Frenzy Cycle” from Medallion Press; and Tortured Spirits, Book Four in his occult detective series “The Jake Helman Files,” also from Medallion. An Active member of International Thriller Writers and the Horror Writers Association, Lamberson also has a following as a cult horror film director and is best known for Slime City and Slime City Massacre.
Visit him at his website, www.slimeguy.com

My Review:
This sounded like a really interesting concept for a zombie book. You have two guys that aren't your typical heroes. They aren't really good guys.  Walker and Boone take off with their bikes after their home base gets overrun. They leave to see the world, or what's left of it. They come across rednecks, lunatics, religious nuts, and even some decent folk.

I'm not a big fan of short stories. They always just kind of feel short and incomplete. Unfortunately this story felt that way too. I think this would have been a great full length novel. Walker and Boone would be even better if their characters were fleshed out more. This story had so much potential that I was kind of felt flat. I really wanted to know more about Walker and his history.


All in all I liked the characters, and definitely wanted to know more about them. I just felt like maybe everything was condensed into a short story and would have benefited more by being longer.