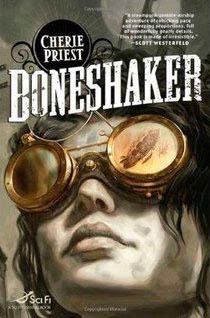 From Amazon.com:
Maternal love faces formidable challenges in this stellar steampunk tale. In an alternate 1880s America, mad inventor Leviticus Blue is blamed for destroying Civil War–era Seattle. When Zeke Wilkes, Blue's son, goes into the walled wreck of a city to clear his father's name, Zeke's mother, Briar Wilkes, follows him in an airship, determined to rescue her son from the toxic gas that turns people into zombies (called rotters and described in gut-churning detail). When Briar learns that Seattle still has a mad inventor, Dr. Minnericht, who eerily resembles her dead husband, a simple rescue quickly turns into a thrilling race to save Zeke from the man who may be his father. Intelligent, exceptionally well written and showcasing a phenomenal strong female protagonist who embodies the complexities inherent in motherhood, this yarn is a must-read for the discerning steampunk fan!


My Thoughts:
Wow! This is the first book I've finished in 2011 and I have to say I wasn't disappointed at all. There were so many things that went RIGHT about this book that the parts that didn't go well could easily be overlooked! First things first, I have to say I love the cover art. The colors (browns, greys, blacks, and yellowish orange) go very well with the story. I think it definite suits the novel.

The next thing I wanted to say is that this is my first foray into the Steampunk genre. I had really no idea of what to expect! I went in with a clear mind and came out a fan of the genre itself! So yeah, you'll definitely see more Steampunk here!

The meat of this story is pretty well done. I loved how fierce Briar is. She's going to get her son and no one is going to stop her! That's Mama bear instincts right there! The Mother/Son dynamics were on point, I think. They have a strained relationship, but can you blame them? I like how this aspect is portray with honesty and depth. You really feel for them both. Zeke and Briar have to deal with a lot of things in their day to day life that they really have no control over.

The trip to the city and the events that take place within it are all pretty juicy too! There are some spots where it kind of lags, but like I said at the start of my review, the rest definitely makes up for it. I'd definitely recommend this book!