Book Spotlight-Extreme Dreams Depend on Teams 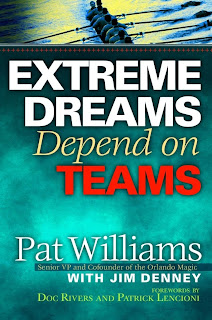 About the Book:
Human beings are designed for teamwork, and teamwork is the only way to make seemingly impossible dreams and bold visions come true. Lance Armstrong won the Tour de France seven consecutive times, not by himself, but with the backing of his coaches, mechanic, and teammates. Charles Lindbergh may have been called “the Lone Eagle” because of his 1927 solo flight across the Atlantic, but he assembled a first-rate team to make his dream possible.

In his new book, Extreme Dreams Depend on Teams (Center Street, July 22, 2009), Orlando Magic co-founder and Senior Vice President Pat Williams says that teamwork is the key to making extreme dreams a reality. Named one of the 50 most influential people in the NBA (National Basketball Association) after following his dream and helping to build the Orlando Magic from the ground up, Williams gives inspiring accounts of the power of teamwork—many of them personal—in a book that leadership guru Patrick Lencioni calls “the most comprehensive and interesting collection of wisdom on teamwork I have ever read.”

In Extreme Dreams Depend on Teams, Williams points out that extreme dreams are only fulfilled when teams are led with characteristics like respect, empowerment, commitment, trust and passion. “Once you put teamwork into practice in your organization, these principles will begin transforming everything. They will transform how you view the world, including our society and its problems, and the political and environmental issues we face…you’ll begin seeing the world through a lens of extreme dreams, extreme possibilities, and the power of teamwork,” says Williams. 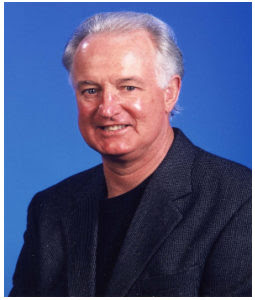 About the Author:
Pat Williams is the senior vice president of the NBA’s Orlando Magic. He is a popular motivational speaker averaging over 150 appearances a year. Williams has spent 45 years in professional baseball and basketball as a player and executive. He served as general manager of the 1983 world champion Philadelphia 76ers and managed the Chicago Bulls and Atlanta Hawks.

Williams is the author of 55 books. He and his wife, Ruth, are the parents of 19 children, including 14 adopted from four nations. He and his family have been featured in such diverse publications as Sports Illustrated, Reader’s Digest, Good Housekeeping, The Wall Street Journal, and Focus on the Family as well as all the major TV networks. Pat and Ruth recently received an award from the Congressional Coalition on Adoption Institute for their efforts in adoption. To learn more about Pat Williams, visit www.PatWilliamsMotivate.com.
at September 17, 2009