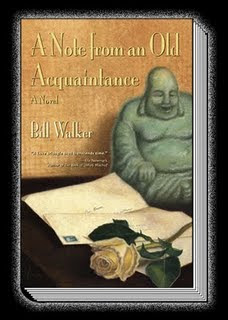 Brian Weller is a haunted man. It's been two years since the tragic accident that left his three-year-old son dead and his wife in an irreversible coma. A popular author of mega-selling thrillers, Brian's life has reached a crossroads: his new book is stalled, his wife's prognosis is dire, and he teeters on the brink of despair.

Everything changes the morning an e-mail arrives from Boston artist Joanna Richman. Her heartfelt note brings back all the poignant memories: the night their eyes met, the fiery passion of their short-lived affair, and the agonizing moment he was forced to leave Joanna forever. Now, fifteen years later, the guilt and anger threaten to overwhelm him. Vowing to make things right, Brian arranges a book-signing tour that will take him back to Boston. He is eager to see Joanna again, but remains unsure where their reunion will lead. One thing is certain: the forces that tore their love asunder will stop at nothing to keep them apart.

Filled with tender romance and taut suspense, A Note from an Old Acquaintance is an unforgettable story about fate, honor, and the power of true love.

Bill Walker is a graphic designer specializing in book and dust jacket design, and has worked on projects by Ray Bradbury, Richard Matheson, Dean Koontz and Stephen King. Between his design work and his writing, he spends his spare time reading voraciously and playing very loud guitar, much to the chagrin of his lovely wife and two sons. Bill makes his home in Los Angeles and can be reached through his website: http://www.billwalkerdesigns.com/

Brian Weller has a chance that very few people get. This story works on the notion that everyone has at least one relationship that has left them wondering, what if? In the past, he had had a fling with Joanna, a talented artist that just happened to be engaged to a powerful businessman. They were in love, but Brian was forced to make a choice. A choice that caused both of their lives to turn upside down.

Years later, he gets an email from Joanna that sends his world spinning. That is the basic set up for the storyline of A Note from an Old Acquaintance, but there is nothing basic about this book. The characters are near perfect. The story progresses at a smooth pace and you feel for the characters. You really do. Walker really knows how to take an old plot line (the love triangle) and shake it up and make it vibrantly fresh and enticing.

I had a wonderful time reading this book. I felt for every character, even Erik, Joanna's rich and driven husband. This is a book I'll definitely recommend and keep in my collection. I am grateful to have gotten the chance to read it. I am also grateful for having the book autographed by Bill Walker! So cool to have that!


And a big thank you to Tracee from Pump Up Your Book Promotion for allowing me to join this blog tour!

Email ThisBlogThis!Share to TwitterShare to FacebookShare to Pinterest
Labels: a note from an old acquaintance, blog tour, books, read