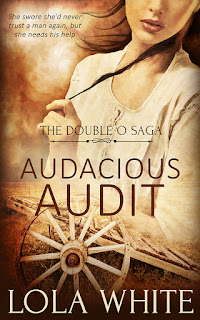 She has little choice—she swore she’d never trust a man again, but she needs his help.
Opal O’Neal doesn’t trust any man. Since her brother’s death and her husband’s departure, she’s been raising her nephew alone, standing on her own two feet as years of drought have left the Double O on the verge of foreclosure. She’s struggling to stay a step ahead of utter ruin, and an investigation by a Home Loan Bank Board auditor is the last thing she needs.

Samuel Hollister is diligent about going over all of Opal’s paperwork, but he’d rather go over all of Opal. Living in the Dust Bowl, she’s a feisty woman who’s been keeping body and soul together through sheer force of will during the Depression, earning Sam’s respect and fostering his desire to help however he can.

The fight for Opal’s rights against foreclosure can’t compare to the burdens of Mother Nature, though. When the biggest storm the region’s ever seen descends on the Double O and puts her nephew in danger, Opal has no choice but to place her trust in Sam—something she’s sworn she’d never do.

The 1930s was a difficult time for most people living in America. For those in the western and Midwest states, the Great Depression was compounded by terrible dust storms, brought on by drought, which led to famine. People left the Dust Bowl in droves, because the land their families had occupied for generations no longer lent them a sense of hope.

Women were forced to knead bread in dresser drawers to prevent dirt from being on the menu. Men worked in dusty conditions that had them choking behind the handkerchiefs they tied around their faces. Children walked miles through the driving grit to get to schools in danger of collapsing under the weight of the wind. The government began initiatives that may have done more harm than good and creditors fought loan forgiveness all the way to the Supreme Court. These were dark days.

The Double O Saga is all about hope, though. In the face of great challenges, insurmountable obstacles, the O’Neal family holds tight to their hope, and in the process finds love. In Audacious Audit, Opal O’Neal hass been abandoned or betrayed by every man in her life, has taken on the responsibility of single-handedly raising her young nephew and is left the burden of dealing with her family’s broken-down ranch, The Double O. She’s a fighter and she doesn’t trust anyone, but Sam Hollister, the bank auditor, is determined to gain her heart, no matter the danger to himself. And there is danger—in the swirling grit of the Dust Bowl’s worst storm, the loss of all Opal holds dear seems inevitable, unless she risks trusting a man, one last time.

The sound of a shotgun being cocked, a bare second before the cold barrel came to rest against his nose. Though stillness reigned in his chest—his heart had stopped dead—there was a whole lot of movement in places much farther south. Places he couldn’t adjust due to the fact that his hands reached for the sky, in spite of the iron grip he maintained on his briefcase.

He cleared his throat and tried not to look as fascinated as he felt with the rough-edged beauty on the other side of the shotgun. “This isn’t exactly a warm welcome to the Double O, ma’am.”

Dark blue eyes narrowed, emphasizing the lines around them created by too many years squinting against the sun. “Who said you were welcome?”

The woman had the voice of an angel, if an angel had been forced to spend a great deal of time in the constantly swirling dust that had descended on Creek Bend over the past few years. She was a bit hoarse, but so were most of the people in those parts. At least she wasn’t gargling with the effort of dislodging the grit from her lungs—probably due to the protective handkerchief she’d pulled down below her chin when he’d emerged from his automobile.

Fighting to keep his gaze on hers, rather than dropping it to run over curves barely contained in a ragged pair of men’s breeches, Sam did his level best to seem professional. “I’m looking for Opal O’Neal.”

The woman gave no quarter, and if the situation hadn’t appeared so dire, Sam would have leapt up onto the rickety porch the woman defended so fiercely and taken her into his arms. And kept her.

“My name is Samuel Hollister. I’m an employee of the River’s Edge Bank and Loan. I’m here to begin auditing the Double O ranch.”

“What the hell are you talking about?” The shotgun moved a few inches down and to the left, giving Sam another look at the beauty wielding it.

She wouldn’t have been every man’s cup of tea, but she certainly suited Sam. Her skin was browned from the sun, faint lines marring what should have been a smooth surface. Her eyes seemed bluer for the hue of her skin and her full lips were a deep plum—a little chapped, but so were everyone else’s, considering the dust. She had a line of freckles crossing her nose and wisps of dark hair escaped from her thick braid to curl around her strong jaw.

She looked tired, worn-down and struggling to keep body and soul together. Just like every other resident of Creek Bend, except for the spirit she showed. Sam sighed and slowly lowered his hands, wishing he wasn’t the lowest ranking man employed by the River’s Edge Home Loan Bank Board. With another few years under his belt, he’d have had seniority and a nice desk, and wouldn’t have had to make the rounds to the unfortunates on the verge of losing everything.

An extensive traveler who loves to incorporate various legends from around the world into her tales, Lola White likes to twist reality at its edges in her stories. She likes delving into the emotions of her characters, finding their strengths and weaknesses, and seeing (and showing) how they get themselves out of whatever trouble has found them—if they can.

For news, exclusives and special deals, sign up for her newsletter at http://lola-white.com