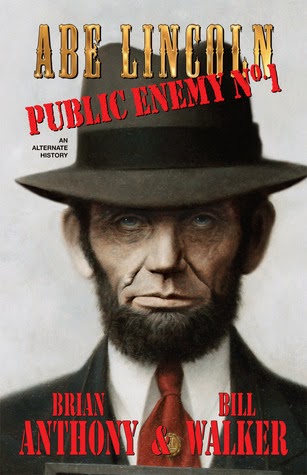 When John Wilkes Booth shoots Lincoln with a bullet cursed by the notorious Chicken Man, a local voodoo practitioner, he unwittingly sets in motion a chain of events extending far into the future. Instead of killing Lincoln, the bullet puts the president into a coma for sixty-eight years, his body remaining limber and ageless. When he awakens in 1933, Abe Lincoln is a man out of time, a revered icon...and a political pariah. FDR and J. Edgar Hoover not only do not want him around, they want him to retire. But their plan to be rid of him backfires and Lincoln is on the run, a fugitive from justice.

Determined to reach Chicago and retrieve the small fortune left in trust for him by his long-dead son, Lincoln discovers that Hoover has confiscated all his money, leaving him destitute. With Bureau of Investigation agent Melvin Purvis in hot pursuit, Lincoln finds his way to a hobo camp where he befriends a young runaway, who agrees to accompany the former president back to Washington. There Lincoln hopes that Hannah Wheelhouse, the Chicken Man's granddaughter, can help him find the peace he longs for.

Then fate deals Lincoln another strange hand when he and the boy end up as hostages to infamous bank robber John Dillinger. Instead of leaving them by the side of the road after the robbery, Dillinger takes a liking to Lincoln and invites him to join the gang, promising him he'll get all his money back.

Will Lincoln survive long enough to recapture his fortune and get away, or will he be hunted down in a manner unbefitting a martyred President?

This was quite a strange book, and I mean that in a very good way. I enjoyed it very much! I kind of went into this thinking it would be a certain kind of read and got something else entirely! I again, mean that in a good way. This plot could have turned out so very cheesy, but it did not. I really do enjoy how Anthony and Walker told a very usual, but thought provoking story. I started to wonder what other historical figures would react/think if removed from their time and brought into a different one. SO much geeky fun!

Okay, so back to the story. I thought it flowed very smoothly. I enjoyed the way the writers handled Abe and made him out to be a fleshed out character and not someone stuck in the pages of a history book. There are other historical figures woven through, and I thought that was just darn spiffy!

From start to finish, this was my face.

I love the way this book was written! It should definitely be a movie! So to Mr. Anthony and Mr. Walker...stand up and take a bow! This is one heck of a book!