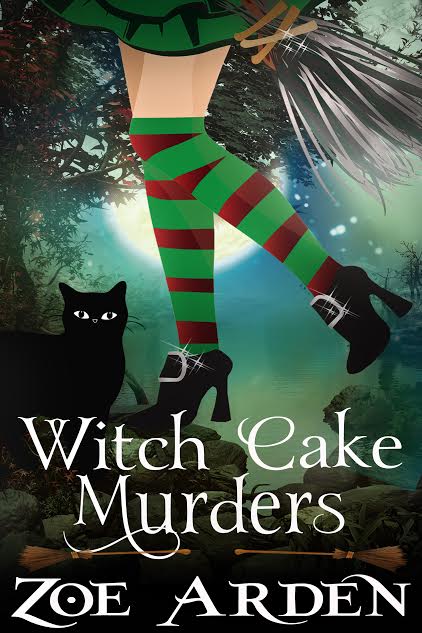 Someone is killing humans and drawing unwanted attention to the supernatural residents of Sweetland Cove.

Ava Rose just turned twenty-one, and with her birthday came a few surprises.
One: she's a witch.
Two: she's part owner of a magical bakery she never knew existed.
Three: Someone wants her dead.

The day Ava arrives in Sweetland Cove, murders begin occurring…
Witches and wizards are quick to blame her, but Ava's aunts won't let the town they love turn against her.

But as the days pass and the only clues point to her, Ava starts to wonder if maybe the sheriff is right.

Maybe she really is the killer.

Can Ava stop the killer before they strike again... even if that killer is her?


"Let me ask you something," Brendan said. "You're a witch. Why do witches like human men?" He was looking at me so earnestly I felt compelled to answer him. I just didn't know what to say.
"Um..." I stammered. "I don't know. I grew up around humans, so I guess I'm just drawn to them." I looked back through the glass patio door at Damon, who was dancing with Megan again. Brendan followed my gaze, looking miserable.
"Love sucks," he said, then shoved the purple stem he'd been twirling into his pocket and skulked off. I turned back to the stars and sighed.
An earth-shattering scream rose into the night, making me jump.
Through the patio door, I could see a crowd gathering around the perimeter of the room. A woman was screaming. I hurried inside. The crowd had opened up, leaving two people in its center.
Felicity stood there, her mouth hanging open. Campbell was dancing around her, his hands flying unnaturally through the air. His head was tilted at an odd angle and his tongue lolled out the side of his mouth, like a thirsty dog. He was making strange grunting noises that almost resembled words.
"He's drunk!" someone yelled.
Campbell swung his hips around and bumped into Felicity, who stumbled away from him.
"All right, all right, break it up," Felicity's boyfriend Lincoln said.
Lincoln was the sheriff of Mistmoor Point, and the crowded parted for him as he came through.  Even if he hadn't been a sheriff, I suspected the crowd would still have parted for him. At six feet tall with bronze hair and blue eyes, he made quite a figure in the middle of a crowd.
"Okay, Campbell. Time to go home," Lincoln said, clamping one hand down on his shoulder.
Campbell yanked Lincoln hard, sending him flying across the room. Everyone gasped. Campbell stopped, looked around, then let out a strange gurgling sound. He fell to the floor. His face was bright blue.
Felicity hunkered down next to him. She gave him one hard shake then looked up at the rest of the room, her mouth gaping.
"He's dead," she cried. "Campbell's dead!"
Who would be next?

It was from reading Agatha Christie’s mystery books that inspired Zoe to write cozy mystery novels. Zoe liked the fact that cozy mysteries are able to offer readers a form of escapism that typical detective stories can’t.

Like what Marilyn Stasio, who has been the Crime columnist forThe New York TimesBook Review since the late 1980s, recently wrote: “The abiding appeal of the cozy mystery owes a lot to our collective memory, true or false, of simpler, sweeter times.” It is Zoe’s desire that her writings will evoke that nostalgic memory in all of us; those memories of the good old days.

What sets Zoe apart in her writings is her fusing of Mystery with Paranormal elements, a combination which will bring about fantasies that are intriguing and engaging. Her stories contain unexpected twists and sometimes light-hearted moments that will make one smile at Zoe’s quirkiness, fun and wittiness in her writings.

This was a lively and fun read that pleasantly mixed a bit of the paranormal into the cozy mystery genre. I enjoyed the quick pace, the characters, and of course the plot.

I enjoyed every second of this book. It wasn't too heavy and not at all too light, it fits right in the middle and that is a great balance! There's a bit for everyone here, from mystery readers to paranormal readers. The writing kept me hooked and the characters made the time reading this well worth it! I had fun in Sweetland Cove and I know you will too! 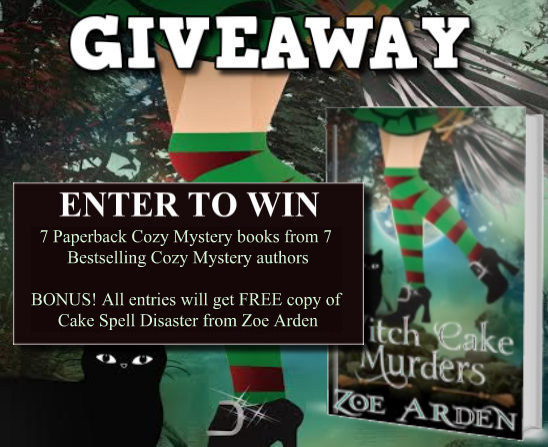 Terms & Conditions:
By entering the giveaway, you are confirming you are at least 18 years old.
One winner will be chosen via Rafflecopter to receive a 7-pack paperback collection of cozy mysteries by bestselling authors. All entries will receive a free copy of Zoe Arden’s CAKE SPELL DISASTER.
This giveaway ends midnight May 31.
Winner will be contacted via email on June 1.
Winner has 48 hours to reply.